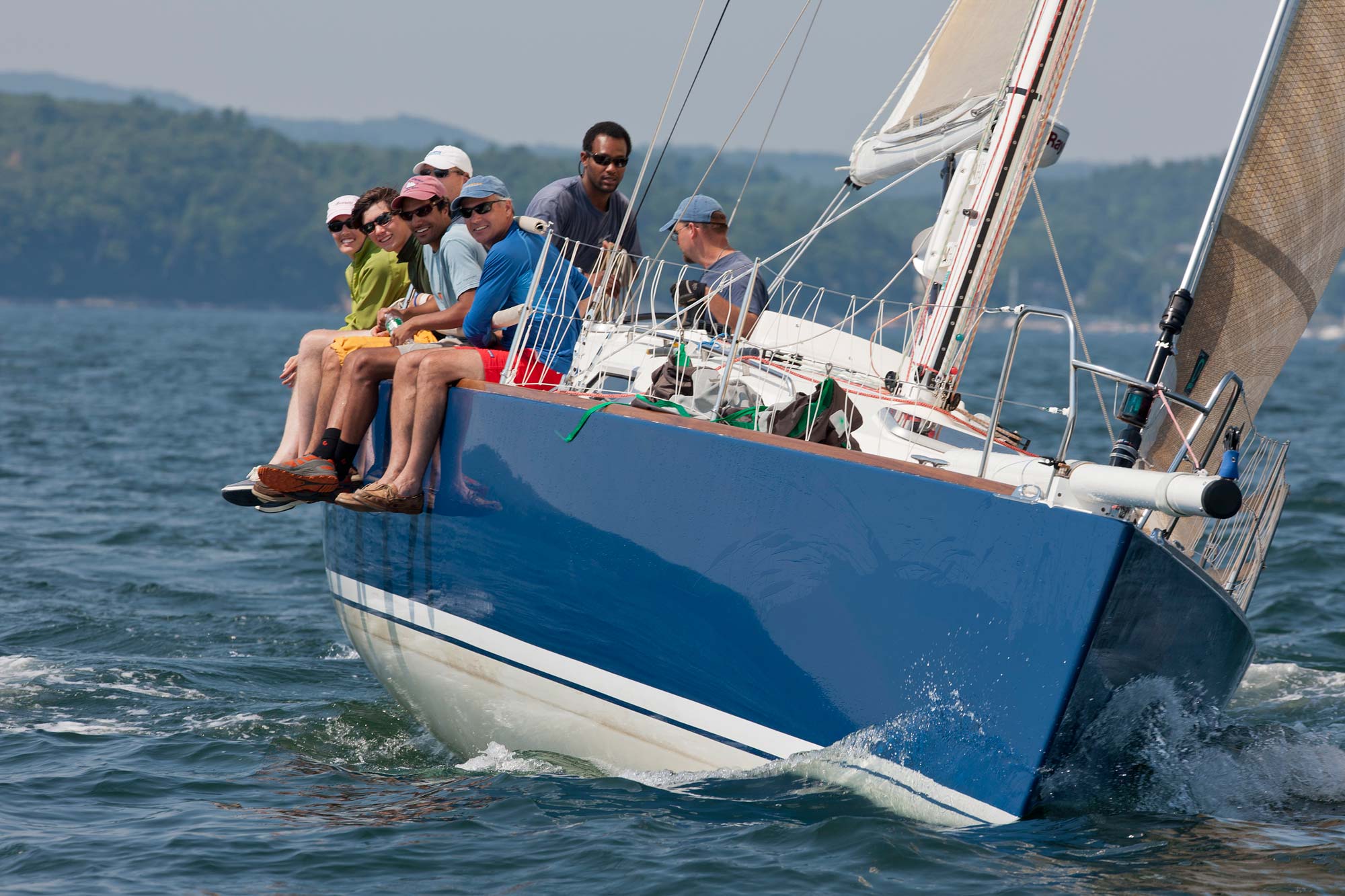 As the summer yachting season looms…a young man’s fancy turns to thoughts of boating and yachting in exotic locations around the world. At least we hope it does.

New England is on the same latitude as Rome and summers are hot. Hit the beaches from Rhode Island to Maine; cool off on the ocean and in the lakes and forests.  New England, with the exception of Vermont is an essentially maritime region.

This is where the original settlers came by boat and even today, New England has a vibrant commercial and recreational marine industry. Boat builders, fishermen, explorers, and famous captains share a large piece of the region’s history.

Places to visit, things to do… Upstream from the broad mouth of the Connecticut River, wooden ships were built and launched from photogenic towns like Essex, Chester, Deep River, Haddam and East Haddam. And memories of yesteryear survive thanks to two of the oldest ferries in the USA.

The best-known offshore destinations in Massachusetts are the islands of Martha’s Vineyard and Nantucket, linked to the mainland via a dozen routes. Most ferries take foot passengers and bicycles; car spaces must be booked in advance. In season, you can even shuttle between Nantucket and the ‘Vineyard’.  The shortest ferry ride ever must be the one minute dash aboard the Chappy Ferry from Edgartown on Martha’s Vineyard to the tiny island of Chappaquiddick.

Rhode Island rings around Narragansett Bay in a huge circle, so this pretty – but immense – ocean inlet is busy with boating opportunities. On Save The Bay’s Ultimate Lighthouse Tour, view more than 20 active and inactive lighthouse sites, with a stop for lunch at Rose Island Lighthouse where you can take a tour. Other trips include marine science excursions, Prudence Island trips, and sunset cruises, departing from Newport and/or Providence.

4 Must-Sees of the New England Experience

Acadia National Park, Maine  Became a national park in 1919, this 47,000-acre, breathtaking chunk of the Northeast is a sample shot-glass of this diverse state.

Trek through deep woodlands, scale mountain peaks, explore the rugged Maine coastline and glide across glass-like lakes. The carriage-road system that runs through the park includes 17 stone-faced bridges arching across bubbling streams and along cliffs and waterfalls.

Newburyport/Plum Island, Massachusetts  A small, coastal city north of Boston began its life as a clipper ship-building hub, a preserved history that forges an almost tangible connection to the past.

The cobblestone streets and brick downtown shops and restaurants invite visitors to explore the area. Park on a bench on the waterfront boardwalk and watch fishing boats and lobstermen head out along the Merrimack River to ply their trade as they have for generations.

Take a quick trip to Plum Island — connected to the city by a winding road that passes the tiny Plum Island Airport — and try your hand at the renowned surfcasting in the shadow of the Plum Island Point lighthouse. Striped bass run throughout the warmer months, while hearty bluefish will test anglers in the later part of the summer.

MysticSeaport, Connecticut  A living museum of the New England maritime way of life, the Mystic Seaport transports visitors to a time when wooden-hulled boats carried men to sea. The seaport features 3 main elements: a working preservation shipyard, exhibit galleries and a recreation of a 19th-century coastal village.

For more sightseeing opportunities, take a carriage ride through the village and explore an authentic period lobster shack, a cooperage or the Fishtown Chapel. Musicians belting out sea shanties and storytellers spinning colorful sea yarns help transport visitors back to the 1800s-era New England coast.

The Mystic Seaport is 2 hours from Boston and New York City, and less than 1 hour from Hartford, CT.

The Casco Bay Islands, Maine  Off the coast of Portland, ME, is a chain of islands that stretches from South Portland all the way to Machias Bay. Peaks Island, a 20-minute voyage from Portland, offers sandy beaches, restaurants and an artists’ community.

Bike the dirt roads of Cliff Island, visit the site of Fort McKinley on Great Diamond Island — now a striking collection of stately homes — or stay the night at Chebeague Island and awake for an early round of golf.

Several islands use golf carts for intra-island transportation, providing perfect opportunities to catch deer grazing in the dense forests. Saltwater flows through the soul of the Casco Bay Island communities, from the way residents make a living to reaching these scenic, stubbornly individual plots of land staggered throughout Portland’s stretch of the North Atlantic Coast.

A word about FOOD Besides the OBVIOUS Maine Lobsters for which the region is famous, many of Maine’s restaurants, inns, hotels, lodges and of course the chefs on the charter-yachts are proud to be part of the nascent farm-to-table movement and, wherever possible, use fish, meat, organic produce and naturally grown fruit that come from local farmers, fishermen and suppliers.

Locally brewed beer is another luxury that can be indulged in this part of the world. Literally scores of mirco-breweries have their home in the New England states.

Portland – named “America’s Foodiest Small Town” (Bon Appetit) and one of the top five “Most Delicious Destinations” (Food Network) – is home to four of the state’s five winners of the coveted James Beard Award. But award-winning dishes are found at heralded restaurants throughout the state.

So, gird thy loins, and come with us to charter a nice yacht in New England and the North Eastern US Seaboard, we have a fine selection of both motor yachts and sailing boats.  Call (877) 759-8263 or email us to see if a beautiful North Atlantic yachting experience is for you.

Secrets to Exquisite Yachting in the French Riviera
January 7, 2019