Charter a Yacht in Turkey and Comfortably Sail the Eastern Mediterranean 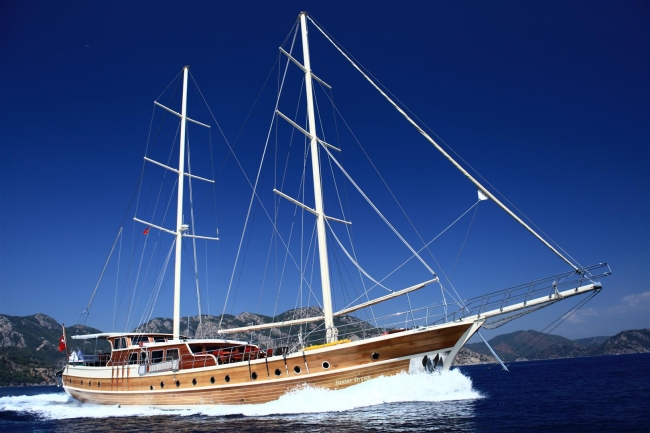 If you’ve DONE the usual Med stuff: the Caribbean, the French Riviera, the Greek Islands, Mikonos, Santorini; Italy’s Amalfi, the Cinque Terre and Sicily, maybe it’s time for a change of pace and TURKEY might have that little kick that will spice up your jaded so-called life. Yes, you may know that Turkey is a Muslim country, and that it’s close to the Middle East. By logical consequence it’s gotta be a dangerous place. Definitely unfriendly to Americans, especially Jews, Christians, etc. etc.. WRONG.

Turkey is a dynamic modern country with it’s roots steeped and closely linked to the Roman Empire, in fact it was  an integral part of the Roman Empire and after after the fall of the Roman Empire it morphed into Byzantium an empire that lasted more than 1000 years. Later it was occupied by the Muslim Ottomans who remained for 650 years and after World War I, under the rule of Mustafa Kemal it became the secular republic of Turkey in 1923. 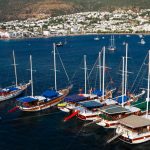 I throw in this snippet of history, only to underline the origins and differences between Turkey and other “Middle Eastern” countries. If anything defines the Turks it is their pragmatism.

They maintain excellent relations with both East and West and are currently negotiating their acceptance into the European Union. Although the majority of Turks are Muslims, there are active Christian and Jewish minorities.

This rich history makes Turkey a unique destination for visitors and frankly, all things being equal, why not do it on a charter yacht. Turkey’s Aegean Coast or the “Turkish Riviera” as it is often called, really encompasses the coastline between Kusadasi (from where you can visit Biblical Ephesus) and Kas which is close to Cyprus. The most popular yachting pick-up ports are Marmaris, Bodrum, Gocek and Fetihye.

The REALLY interesting part of this area is the fact that, due to their proximity, you can also include a few very interesting Greek Islands into this mix. The Greek islands along the Turkish coast are collectively called the Dodecanese Islands. Some of the must-sees along the coast are, from North to South, Samos, Patmos, Leros, Kalymnos, Kos, Symi, Rhodes; and the tiny island of Nisos. 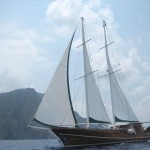 So what I’m really saying, is that you can include several Greek Dodecanese islands in your Turkish coast charter and have the best of both cultures.

Not all of this can be done in a week – a two weeker is best and will give you a real flavor of the region. Marmaris has a terrific natural harbor and many charter yachts use this beautiful resort as a pick-up point for their guests.

How to get to the area from the US: you have a choice of flying into either Istanbul and taking a regional Turkish Airlines flight to either Bodrum or Dalaman airports OR flying into Athens and taking a  regional Greek flight (Aegean Air is great) to either Samos or Rhodes. Most charter yachts can pick up in either location.

From Europe: there are direct flights from many major cities directly into Rhodes and the Turkish airports.

Timing your visit: the Mediterranean is definitely for your summer months vacation or holiday. The summer season starts in May and runs through September.  Here are some words of wisdom. July and August are the warmest but also the most popular and crowded, Brits, Russians, Germans all invade Turkey and the Dodecanese during these months.

Yachtsmen and charterers visiting in July and August also need to be careful with the Meltemi winds that blow from North West to South East and can stir up the seas quite uncomfortably. The best months for the region are therefore May, June and September. I especially like September when the waters are still warm from the summer and the crowds have gone home.

We can customize an itinerary for you that will include all the best places for your particular group or your family’s preferred activities and interests; plus we can offer the best sailing and motor yachts and Turkish Gulets.  There’s a lot more information on our Mediterranean website including a  detailed map of the area.

We’d love to help you put your sailing vacation together, our knowledgeable in-house specialists and our partners in Greece and Turkey are standing by!